Although it hardly outweighed the displeasure of sitting exams, the one benefit of being in exam block was that senior students could come and go from the school whenever we pleased. Well, that's not altogether true; we were supposed to remain at school once we arrived and only leave once all of our exams were complete, but absolutely none of my peers followed this rule.

We went to the Foodworks a few blocks from the school to buy treats like chocolate frosting and Red Bull. The latter tasted like medicine, but I drank it as I leaned against the lockers, grimacing with each swig like it was hard liquor. It helped keep my brain moving too fast through my exams, which must be—at least in part—responsible for the decent grades I ended up with at the resolution of my high school career.

I didn't revisit the joy of Red Bull until many years later, when their Blue Edition was released. I didn't drink any other caffeinated drinks at this time in my life—I disliked the bitter flavour of coffee, and wasn't particularly interested in other softdrinks—so the sickly sweetness coupled with the kick of energy that the Blue Edition brought me was joyous.

I set strong restraints to prevent myself from overdrinking Red Bull and giving myself a heart attack, but I did become somewhat reliant on the caffeine, akin to the office workers who drag themselves to the nearest café before they can concentrate on their computers. I drank cans of Red Bull in the tea room at the Coles where I used to work, which I bought by the handful using my staff discount. Luke used to drink the standard Red Bull as much as I drank the Blue Edition and we'd share guilty laughter when we saw one another carrying baskets full of our addiction to the registers.

During a visit to Sydney to attend a convention for my work in games journalism, I stumbled across a problem: I was relying on Red Bull to help me get through my wild workload, but the local Woolworths didn't stock the Blue Edition. Desperate, I bought a can of standard Red Bull and—recalling those day leaning against my high school lockers—I took a drink of the medicine. But it didn't taste like medicine anymore; it tasted delicious. Potentially better than even the Blue Edition.

This was for the best because, in the coming weeks, the Blue Edition went on Clearance sales in the grocery stores around my house. The last cans disappeared from the shelves and were replaced by summer flavours like coconut and other awful things I refuse to drink. (Incidentally, the coconut Red Bull did taste like medicine—a very particular medicine I had to take as a child to help deal with a nasty case of tonsilitis.)

This may have been the optimal time for me to shake my Red Bull addiction, but instead I transitioned from Blue Edition to the standard flavour. It's much more readily available in vending machines and in bulk-buy packs.

No, this isn't a story of how one young girl cured herself of her Red Bull addiction. Some days these cans of caffeine and taurine and whatever-other-ine are the only things keeping me upright. There's one on my desk right now. But I still avoid having more than one per day, and I still don't drink coffee or other softdrinks, so maybe I'm allowed to have this vice.

Or maybe I should stop relying on caffeine to keep me going when I really need to have more naps and stop overcommitting myself.¹ Perhaps I'll learn that lesson one day.


¹ Alayna, you just started a new blog. You understand that that's committing yourself unnecessarily to yet another project, right? 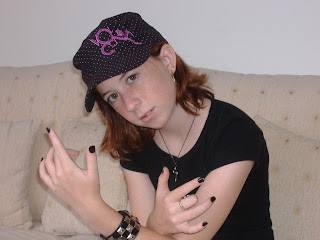 On my primary school bus—Number 14—there was a boy from Maroochy High who was in grade ten while I was in grade five. He had badges on his schoolbag from bands he liked, and used to share their music on his MP3. We called him Frenchy because his name was Francis.

I used to go to the store with my mum. She was a good sport, buying me black clothes and nail polish, and helping me select pins. There's this fantastic series of photos of me at Christmas at my grandparents' house, wearing a collection of black clothes and accessories that my mum provide…
Read more

June 06, 2019
Giovanna Coutinho is the person I've been friends with the longest, and I've never even met her in the flesh. When we first encountered each other on Neopets, we were both eight years old. We chatted on MSN, and when that became obsolete, we moved to Facebook messenger. We stopped playing Neopets, and moved on to Gaia Online, and then other things that didn't stick quite so well. We've been mates for 17 years.

Once, while she was still living in Brazil (she's based in the USA now), I told her that I caught the bus to school. She was amazed. Apparently, in Brazil, you couldn't catch the bus. (At least at the time—I'm not up-to-date on current Brazilian bus politics.) She told me that busstops were basically tourist traps: people would mug you if you were waiting in one because the buses were unreliable and unused, and the only people who attempted it were tourists who were probably carrying passports and valuables worth stealing.

This was one of my first enc…
Read more

One way that we can help others feel like they aren't alone is by sharing stories that they can relate to, and I try to live in a way that facilitates that. Many of the topics I discuss below are topics that society has shrouded in stigma and has taught us to feel ashamed about, and by speaking out I am explicitly trying to change this narrative.

That said, I am not the only person involved in these stories, and it's not my place to tell other people's tales. For this reason, some stories may sound vague and some parties will remain nameless.

In addition, sometimes we hide our truths from certain specific individuals, not because we are ashamed, but because we think their empathy would be too great. By revealing or remembering our traumas with these people, they are at risk of being harmed themselves. This one would hurt you to read, Mum; I'd recommend skipping it.

Content warning: Sexual assault, drink spiking, abuse of power and aut…
Read more
Just as our memories are disjointed, messy, and chaotic, so should be our memoirs.